Sonya, a volunteer with RINJ

by Sonya Yoshiki, a volunteer activist against rape, especially in Asian nations.

Many judges in North America have decided on their own to radically exceed the ‘guidelines’ for rape penalties when their adjudication of the case motivates them to believe extra time is needed to protect the public or to punish the guilty. More should feel confidant in doing that. It must be considered that,

Penalties For Rape Should Hurt

• Increase penalties for rape and attempted rape across the board;

• Make all rapists and most attempted rapists subject to long indeterminate sentences;

• Use life without parole for forcible rapes of victims under age 13;

• Use a range of 7, 10, or 15  to 25 years for rapes of adult victims, while using a 30 to life term when a sexually violent repeat  predator specification is proved;

• Create a new type of review by the sentencing court, available only after the minimum term is served, which would run parallel to the Parole Board’s reviews in the case;

• Increase penalties for first offence attempted rape to 5 years and an additional 3 years for each subsequent offence. 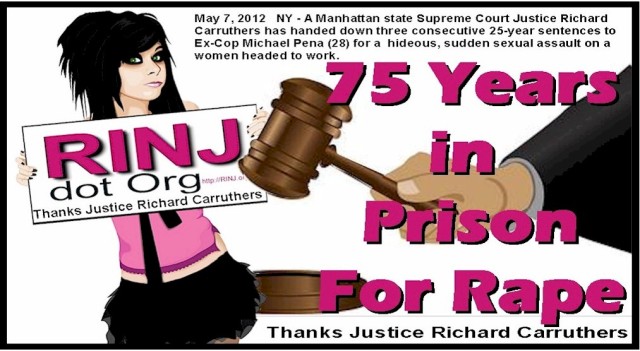 May 7, 2012 NY – A Manhattan state Supreme Court Justice Richard Carruthers has handed down three consecutive 25-year sentences to Ex-Cop Michael Pena (28) for a hideous, sudden sexual assault on a women headed to work. 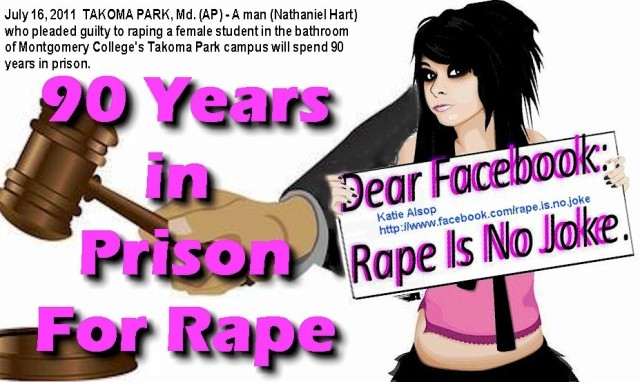 If you would like to help eliminate pro-rape and

Please cut and paste everything below between “>>  <<”  into as many places on Facebook as you can, or anywhere.

>>  If you see content on Facebook that seems unsavoury because it contains pro-rape; rape drugs; or child-molestation content, please paste the link to an email subject line and send it to badads@rinj.org. Also report it to Facebook. Thank you. http://facebook.com/rape.is.no.joke  <<

I am the Reaper.
View all posts by So Yoshiki →
This entry was posted in RINJ. Bookmark the permalink.
%d bloggers like this: